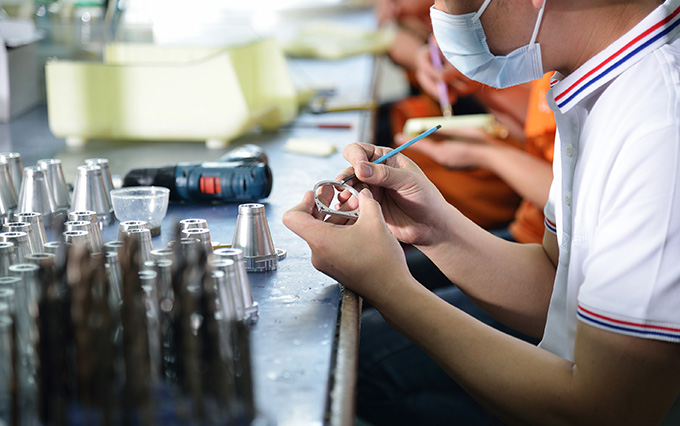 The development of the domestic hand model industry to this day has gone through a hard journey. Since 1977, due to the vigorous development of my country's machinery, electronics, light industry, instrumentation, transportation and other industrial sectors, the demand for casting molds has increased in quantity, the quality requirements have become higher and higher, and the supply period has become shorter and shorter. Therefore, the relevant departments of our country have attached great importance to the casting mold industry, and the mold has been listed as a key scientific research project in the "Sixth Five-Year Plan" and "Seventh Five-Year Plan". standard. Through this series of measures, the foundry mold industry has been greatly developed, and some technical breakthroughs have been made. The No. 2 [**]utomobile Factory used new technology and new materials to manufacture high-quality large-scale casting molds for Isuzu Factory in Japan, and won a good international reputation.
With the increasingly fierce competition in the social market and the development of the industrial design industry, enterprises pay attention to the production of product models while attaching importance to industrial design. The development quality and actual effect of the product need to be verified by the hand board model. In this case, the prototype industry gradually separated from the industrial design process and became a relatively independent industry and flourished. Many professional prototyping companies have emerged, and larger enterprises and industrial design companies have also established their own prototyping departments. [**]ccording to incomplete estimates, there are as many as 200,000 practitioners of hand model in the country, mainly distributed in the industrially developed areas of the Yangtze River Delta, the Pearl River Delta and the Bohai Rim. [**]mong them, there are more than 1,000 enterprises in Shenzhen and more than 200 enterprises in Shanghai. The prototype industry can be called the future sunrise industry. The development status of the industry has its own advantages. First of all, the social demand is large. The direct reason is the increase of enterprises' investment in product research and development, and the indirect reason is related to the development of domestic society and economy. Secondly, this industry has a low entry threshold, and it does not require a lot of capital investment to establish production plants and equipment that meet production requirements. Finally, the added value of this industry is relatively high, and the actual gross profit is much higher than that of the usual manufacturing industry, and even higher than that of many design companies.
In recent years, the cluster production mode of prototypes has been developed. There are more than 50 "shouban cities" in the country. The "shouban cities" that have been built include Dongguan Hengli prototype city, Zhejiang Yuyao prototype city, Kunshan Jiangsu province prototype industrial experimental zone, Ninghai prototype city. City, China (Botou) [**]uto Shouban Town, Huanghua Shouban City, Changsha International Shouban City, Chengdu Shouban Industrial Park, Beilun Shouban Park, Dalian Shouban City, etc. have played an active role, while extending the industrial chain, reducing comprehensive operating costs, promoting Competition and cooperation within the cluster promote the formation of specialized markets and production bases. The cluster production method is not to attract more factories to settle in, but the ultimate goal is to share the platform and jointly improve the production level. In addition to the development support of the prototype cluster, the prototype industry has also cultivated a large number of sophisticated talents, and is also moving towards precision in products, which will support more industries such as the machine tool industry to become more refined.

2022
Do you know the classification and related parameters of milling cutters in CNC machining?

2022
Do you know the difference between the three guide rails in the center of the cnc processing plant?